Members of the Hamilton Lab 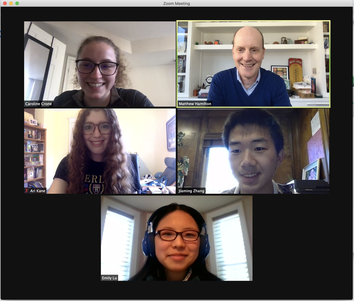 Students interest in research in the lab should contact Professor Hamilton. Georgetown students should consider working in the lab and participating in the GUROP program (https://gurop.georgetown.edu/). I am also happy to mentor Biology majors in RISE projects.

If you are interested in computer science and coding, there are numerous possible research and education projects to work on. For example, you could build a new simulation module for the web site http://evolutiongenetics.georgetown.edu/ or design and carry out a simulation study.
Doctoral students
No current doctoral students, but I am interested to have new graduate students join the lab.

Sivan Rotenstreich Leviyang
Sivan was a post-doctoral fellow working with Dr. Matthew Hamilton (Department of Biology) and Dr. Judy Miller (Department of Mathematics). His research is in mathematical biology and population genetics theory. Prior to coming to Georgetown, he received a Ph.D. in mathematics at NYU. Sivan is now an Associate Professor in the Department of Mathematics & Statistics at Georgetown University. See ​https://sivan-leviyang.facultysite.georgetown.edu/

Brian Wood
Brian was a post-doctoral fellow working with Dr. Matthew Hamilton (Department of Biology) and Dr. Judy Miller (Department of Mathematics). He focused on the evolution of quantitative trails depending on their genetic architecture. Brian is currently employed at Raytheon. 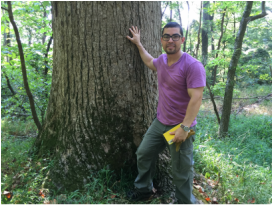 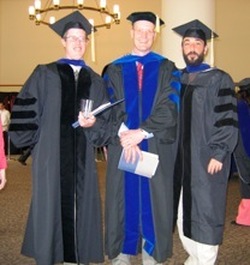 Chris Drummond on the left and David Soria on the right at graduation in May, 2007.
Ricardo Gutierrez Ozuna (PhD 2018) Ricardo worked with the forest tree tulip poplar (Liriodendron tulipifera), a native tree of the mid-Atlantic and South-east United States that is an important timber species. He is examining regional population genetic differentiation, effective population size, and mating system. Ricardo was a recipient of a CONACYT graduate fellowship.
​
​Amy Battocletti (Masters 2017)
In collaboration with her co-advisor Prof. Gina Wimp, Amy studied both a plant (Spartina patens) and an insect (Tumigena minuta) in a salt marsh ecosystem, investigating the impact of habitat variation and fragmentation on intraspecific genetic diversity at multiple trophic levels.

​Christopher Drummond (PhD 2007)
Chris was a doctoral student with interests in the ecology, evolution and genetics of plants whose work focused on the phylogenetics of California lupines (the genus Lupinus) and the mating system and population structure of Lupinus sect. Microcarpi, a monophyletic group of annuals that exhibit a broad range of floral phenotypes. Chris received a B.S. in Biology from the University of Maryland in 2000 and an A.B. in Semiotics from Brown University in 1993.  Chris was a recipient of a both a Georgetown University graduate fellowship and National Science Foundation predoctoral graduate research fellowship. In 2007, Chris won the Georgetown University Glassman award for outstanding doctoral dissertation in the sciences.

Chris went from Georgetown to a postdoctoral fellow in Center for Research on Invasive Species and Small Populations within the Department of Fish and Wildlife Resources at the University of Idaho.

David Soria (PhD 2007)
David first came to Georgetown as an exchange student from Universidad Autonoma de Madrid in Spain. He joined the graduate program and the Hamilton lab during that time. His dissertation research focused on comparing relative rates of molecular evolution in tropical trees and other plants.

David pursued a doctoral thesis with two main parts. First, he tested for parallel patterns of relative rate heterogeneity between the chloroplast and mitochondrial genomes in the Lecythidaceae tropical tree family. Sequence data from multiple non-coding regions in both of these organelle genomes showed that relative rate increases or decreases were common to both organelles. That is, taxa with accelerated/decelerated rates showed this pattern in both organelle genomes. This result is consistent with neutral hypotheses for causes of rate heterogenety. Second, David’s thesis reexamined evidence for different relative rates of nucleotide substitution in annual and perennial plants, a sort of “generation time hypothesis” for plant rate heterogeneity. Using ITS sequences (the locus most commonly used to address this question), there are no significant relative rate differences between annuals and perennials. However, simulations show that ITS sequences have very little power to detect modest levels of rate heterogeneity. Yet evidence from a ITS suggests that non-significant annual/perennial differences in substitution rates is around 1.3 to 1.7 fold. Further, substitution rate differences between annual and perennial Arabidopsis tested for multiple concatenated nuclear genes does show rate heterogeneity. Thus, a plant generation time effect may exist but ITS sequences do not have the statistical power to detect it.

After Georgetown, David joined the Genographic Project as a postdoctoral researcher.

Caroline Sheridan
Caroline was a research assistant and the lab manager from 2008 - 2010. She graduated from Wellesley College in 2008 as a Biology major. Caroline was instrumental in developing microsatelite markers for planthoppers and carried out genotyping work with CNDP1 and Gulf war illness studies. http://melnicklaboratory.med.cornell.edu/people/carolinesheridan.php

Nathan Poslusny
Nathan was a research assistant and the lab manager from 2006-2008. He graduated from the University of North Carolina at Chapel Hill with a BS in Biology and Environmental Sciences. In the Hamilton lab, he used molecular and computational techniques to investigate the temporal genetic signature of a population bottleneck in Chesapeake Bay striped bass.

Genevieve Croft (BS 2002)
Genevieve was a graduate of the Georgetown undergraduate program in Biology, a Peace Corps volunteer and then a research assistant and lab manager in 2005-2006. Genevieve entered the PhD program in Ecology, Evolution and Population Biology at Washington University in St. Louis in 2006 and was awarded a National Science Foundation graduate fellowship in 2007. See http://www.biology.wustl.edu/faculty/schaal/croft/home.html. 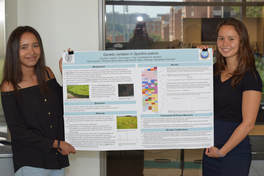 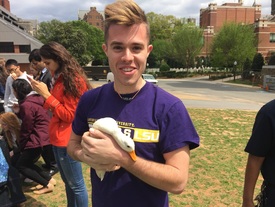 Kyle Brown (BS 2004) - He was awarded a National Science Foundation graduate fellowship and received a PhD from the Department of Organismic and Evolutionary Biology Program at Harvard University.  He is now a senior health policy adviser to Gov. John Hickenlooper, has been named to the board of directors of Connect for Health Colorado.