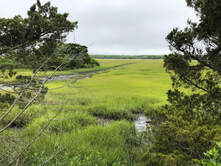 A LandSAT image of the Biological Dynamics of Forest Fragments Project study area in 1995. Dark green is intact forest, light green young second-growth forest and red is pasture or bare soil. Isolated forest fragments of one, 10 and 100 hectares are visible as dark-green squares within light green areas. Trees in 10 hectare plots of continuous forest are available as controls.
The overall goals of this study were to compare patterns of pre-deforestation gene flow to post-deforestation gene flow in replicated forest fragments and continuous forest controls. This project has two main components.

First, to determine if a change has taken place, it is necessary to have estimates of some initial pattern that can be compared with some later pattern measured after forest fragmentation. The initial pattern is the degree of population genetic structure in adult trees since these individuals established well before the relatively recent forest isolation events. InC. alta, data from nuclear microsatellite loci estimate FST as less than 0.1 while data from chloroplast insertion-deletion polymorphisms estimate FST as about 1.0. This finding suggests that in historic C. alta populations, pollen gene flow was extensive while seed gene flow was extremely restricted (the results are indistinguishable from seed gene flow 400 times less than pollen gene flow in a island model).

Bee pollinated Corythophora alta has small hooded flowers that each last a single day but are produced in small numbers for many months (right). The tree has large woody fruits (left) that contain meaty seeds, a feature common to members of the Brazil nut family (Lecythidaceae). Seeds are presumably dispersed by primates, birds and rodents.
Second, the degree of population structure after forest fragmentation was estimated by examining patterns of mating among trees in both forest fragments and continuous forest. The paternity analysis results suggest that rates of on-plot versus off-plot gene flow are not different between fragments and continuous forest. In addition, rates of self-fertilized seeds were about 10 percent in both fragments and continuous forest. These paternity estimates were obtained with an extension of the standard exclusion model that allows for genotyping error in paternity assignment and incorporates selfing when computing the probability of a random match to the inferred paternal haplotype. ​ 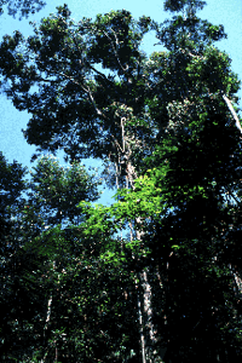 ​Corythophora alta occurs at a density of 1 to 4 individuals per hectare in the BDFFP area. Trees are tall and sampling is slow and dangerous. Notice the woodsman on the tree trunk clipping branches with a pruning pole to obtain a leaf sample for DNA extraction. Many of the DBFFP woodsman are expert tree climbers and scale trees using only a web belt around their feet. This method of tree climbing does not damage trees. I am greatly indebted to them for sharing their knowledge of the forest and their hard work.
The ultimate goal is to determine if deforestation alters historic patterns of genetic organization and the rate at which deforestation may cause genetic changes in tropical tree populations. Such quantitative measures of the impact of tropical forest fragmentation on the evolutionary dynamics of genetic variation are needed to predict the long-term impacts of deforestation. Estimating the effects of forest fragmentation on gene flow will help us to predict the genetic consequences of further habitat degradation and to intelligently design tropical forest reserves.